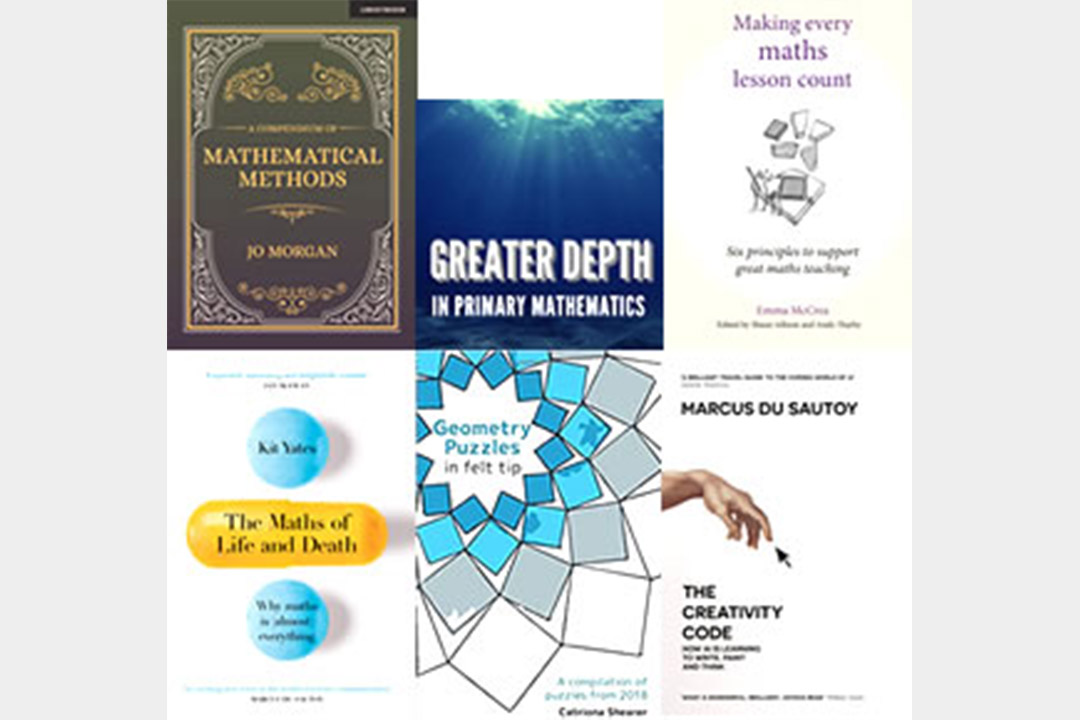 We know there’s a bit of a ‘busman’s holiday’ danger of suggesting you add a book about maths to your holiday reading list. It might be even more dangerous to buy one for someone else as a present! We sense that, over the last few years, many books in this genre have got closer to classroom realities. Some are, of course, written by teachers still doing the real day job.

So, here’s a selection—in no particular order—of books with maths as a focus, that came out in 2019.

If you follow Jo Morgan’s social media activity, and her Resourceaholic website, you’ll know that this maths teacher loves digging up examples from the sort of maths textbooks that used to get covered in protective brown paper by pupils at the start of every school year. If that means nothing to you—ask a parent. Or a grandparent! Well, this sort of research has contributed to her book on mathematical methods, which claims to have unearthed more than a hundred different ways of grappling with all sorts of maths questions. The range is wide: from subtraction and division to surds and polynomials. So, the ‘handbook for teachers’ element of the book’s title sounds well-founded.

Here’s a book that aims to get to the core of every primary teacher’s day job: helping children understand the maths in front of them. And not just superficially, but with depth. Part One identifies four key characteristics that help lead to ‘greater depth:’ curiosity, metacognition, making connections and open questions. Then we go into the classroom, where the author (the driving force behind the Maths Week England initiative in November, by the way) suggests ten teaching strategies to facilitate greater depth of understanding. These include ‘Why is this the answer?’ and ‘What if?’ And each strategy is exemplified with a classroom example from Key Stage 1 and another from Key Stage 2.

Emma McCrea works in the world of teacher training, working both with newbies at the start of their careers and experienced teachers. This book come from the same stable as several other ‘Making every lesson count’ titles, with science, English and geography among other subjects covered. In common with all the other versions, the book amplifies six principles to support great teaching, namely: challenge; explanation, modelling, practice, questioning and feedback. The book leans heavily on recent research in the areas of memory, learning and motivation, with meticulous lists of references at the end of every chapter. But dusty and dry this isn’t. The language flows, and classroom credibility shines through.

The Maths of Life and Death - Kit Yates

Maths teachers have long been challenged by pupils, some suppressing a yawn, to demonstrate how those equations and symbols peppering board relate to the world outside the classroom. This book, by a maths lecturer at the University of Bath, attempts to help teachers do just that. And with Core Maths courses attracting more post-16 students year-on-year, it’s a timely publication. Among real-life contexts covered are genetic testing, miscarriages of justice and the use of statistics in political debate. The objective seems to be a call to all of us—and by extension those we teach—to engage with and understand the maths around us, and thereby take more control of our own decisions.

Geometry Puzzles in felt tip: A compilation of puzzles from 2018 by Catriona Shearer

Here’s a book that might prove an alternative to the big Christmas jigsaw or the Rubik’s Cube, in that it’s brain exercise with, hopefully, an aesthetically pleasing result. If you follow the author (a full-time secondary teacher) on Twitter (@Cshearer41) you’ll know she likes posing geometrical teasers. It began when she started making up, and solving, similar puzzles for herself during the summer holidays. This book brings a year’s worth of those puzzles into one place. Although if you have the energy to trawl through Catriona’s Twitter timelines, they’ve all been featured individually online before. So, turn the telly off, grab a piece of paper and a pencil, and start reasoning!

The great Alan Turing, after breaking German codes to help win the war, returned to his ground-breaking pre-war work that would eventually lead to the computers we take for granted today. Also, in the 1940s, he mused on whether a machine could think. Marcus du Sautoy, in this book seven decades later, is asking a related question. Will computers ever be able to compose beautiful music, write novels or paint masterpieces? Do our brains merely react to pattern, and can those patterns be mathematically defined, and therefore programmed into computers? And just like Turing, du Sautoy’s writing rests on the maths. Included, for example is a guide to how algorithms work, and the mathematical rules that underpin them.

All these books are available to buy online or via your local bookshop. You might like to try buying via hive.co.uk, which combines an online purchase with a pick-up at your local high street shop.

By the way, we’re not claiming this list is exhaustive, and if you’d like to recommend a book published in 2019 that might, in some way, be enjoyable and useful reading for a teacher of maths, please use the Comments box to give it a mention.