‘Not working in ability groups has been a revelation’

One of the first things Year 4 teacher Tracey Baruah tried when her school joined the Mastery Readiness Programme was abandoning the practice of putting children in different groups according to their perceived ability.

But Tracey, maths lead at Spring Bank Primary School in Leeds, with over 25 years' teaching behind her, quickly saw the benefits:

Not working in ability groups has been quite a revelation, she enthuses.

Watching Tracey lead a class discussion with Year 4, it is striking that all the children are involved, and that the discussion she’s leading is only possible because the children have all been working on the same, open-ended question.

Sarah Hawes, the headteacher, notes the high level of engagement from all children:

…and that speaks volumes about how children rise to the challenge. Regardless of what their ability is deemed to be, if you give them an equal opportunity at something, they rise to it. They will have a go.

Sarah explains that they now often use the format of question we have seen in the Year 4 lesson: asking children what they know, and what they can find out. It has really helped pupil confidence because it removes the feeling of ‘I can’t do it’.

Spring Bank Primary School is a one-form entry school in the Headingley area of Leeds. Following an Ofsted judgement of Requires Improvement (RI), the school joined the Mastery Readiness Programme with the West Yorkshire Maths Hub. They took the decision to remove ‘ability’ groups early on, hoping to increase all children’s success in maths.

Pupil confidence is one of the things that has been improved by removing ability-groupings, says Tracey:

Some of my children came into Year 3, last year, thinking ‘That work’s not for me’. And now they would never say that.

Children will still say ‘Yes, I find maths tricky, but I know what to do to help me, I know who I can talk to, I know what I can use’. I think historically, when we did do that three-way, five-way differentiation, we were labelling. I really do feel it labels children. And children aren’t daft – they know when they’re not getting the hard work.

So, how does giving the whole class the same problem help build all children’s confidence? Sarah explains that those children who might previously have been given work for ‘lower ability’ pupils would never get the opportunity to see or hear the most difficult maths being done in the class and to engage with it. She says, ‘Now all children are seeing the best possible (mathematical) outcomes (from the problems set)’. Not only that, Tracey points out, but their contributions are being valued by others in the class: 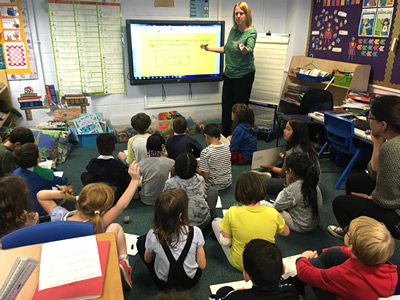 Furthermore, Sarah points out that ability-grouping was crude and didn’t allow for times when children found a topic easier or harder than usual:

We’ve also talked about how one size doesn’t fit all. All children have different skills, different areas of expertise, different understanding. You can have a child that really struggles with calculations and problem-solving but is a complete whizz when it comes to time or money. They bring those skills to the table.

And what about those children that might previously have been on the ‘top table’ or doing ‘harder’ work? Tracey says that children can still be challenged, but by deepening their understanding rather than racing on to the next topic with only a procedural understanding of the previous one:

At the other end of the spectrum, the ‘more able’ children, they’re still engaged in what you want them to do. And they’re able to share their expertise. There are lots of very subtle ways that you can extend them. It doesn’t have to be a different activity. It can be through your questioning. When children are busy, there’s lots of scope to go and ask individual questions.

It’s not just about ‘they are very good at that, let’s see what’s harder, or more challenging or a bigger number’ – the old style of looking at challenging maths. The staff collectively really do understand that going deeper is about the reasoning, the explanation, the ‘how can you show this?’ I think the children have really embraced that as well – they understand that it’s not just about harder maths and bigger numbers, it’s about truly understanding. Removing ability-grouping is just one aspect of how things have changed at Spring Bank Primary School. To hear the whole story of how the school has thrived as part of the NCETM Mastery Readiness Programme, supported by West Yorkshire Maths Hub, listen to Tracey and Sarah in this NCETM podcast. It’s an inspiring story.

You can also read a case study from a tiny rural school with an Outstanding Ofsted judgement, Why Mastery Readiness isn’t just ‘mastery-lite’.