The importance of Core Maths and the support available

An article from our Director, Charlie Stripp 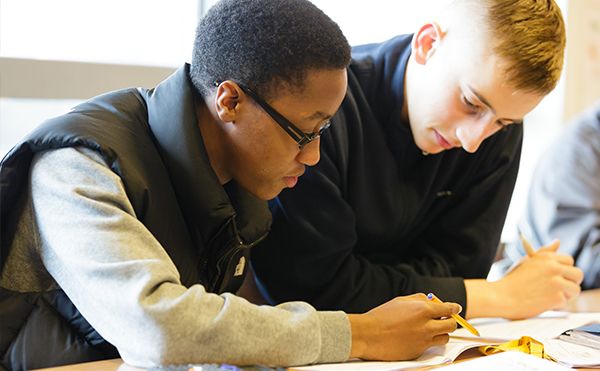 Maths education is so important that 16-year-olds shouldn’t be pondering ‘Should I take maths post-16?’ Instead they should be asking ‘Which maths should I take?’

Historically, if AS/A level maths was not the right choice for students who had ‘passed’ GCSE maths, no suitable alternative post-16 maths option existed. Now (since 2014) Core Maths, which is specifically designed to fill this qualification gap, is establishing itself as an excellent option for these students.

Everyday life and work are becoming increasingly mathematical. It’s indisputable that a facility with mathematics and the ability to analyse and interpret data improve young people’s prospects in higher education and employment[1], but that’s not the only reason why maths education is so important. To play a full part in today’s society, it is essential to be able to make sense of numbers and critically analyse data.

Bertrand Russell is one of my heroes. I disagree with many of his views on education, but I certainly agree with him about its social importance:

‘One of the impediments to successful democracy in our age is the complexity of the modern world, which makes it difficult for ordinary men and women to form an intelligent opinion on political questions, or even to decide whose expert judgement deserves the most respect. The cure for this trouble is to improve education.

Every believer in effective democracy must support this reform.’

Russell wrote this in 1932[2]. The nature of today’s world means that education, and mathematics education in particular, is more important than ever before.

The situation in England

In England, compared with other developed countries, an unusually low proportion of young people study maths to a level beyond GCSE standard[3] and the large majority of those who succeed in achieving the national expectation of a grade 4 or above in GCSE Maths stop studying maths at the age of 16. This is over 250,000 students each year.

A level Maths and Further Maths numbers have grown strongly in recent years[4], which is excellent news, and we must continue to work to increase uptake. However, A level Maths is not the most suitable qualification for the large majority of the students who currently drop maths at age 16. The new Core Maths qualifications, first taken in 2016, are designed to meet the needs of these students. Feedback from students who have taken Core Maths, and from teachers who have taught it, is very positive, and universities and employers[5] agree that it is a valuable qualification. Numbers are growing strongly and almost 7000 students took Core Maths in summer 2018. However, the number of students who would benefit from taking Core Maths is huge. We should aspire to an annual cohort of over 100,000 students choosing to take Core Maths within the next 10 years.

Schools and colleges where Core Maths is growing

All schools and colleges teaching post-16 students should be able to offer every student with a grade 4 or better in GCSE Maths a suitable post-16 maths pathway:

Funding and support for Core Maths

The Advanced Maths Premium, funded by the government, is a funding incentive designed specifically to help schools and colleges raise participation in maths education beyond GCSE level. It offers a £600 per year funding boost for each additional student taking an eligible maths qualification, relative to a baseline[6]. The AS levels in both Maths and Further Maths are eligible for the premium, as is Core Maths. The full A levels in Maths and Further Maths can each be counted twice for the premium, once in each year of study. As an example, starting up a new Core Maths class with 15 students could bring a school or college an additional £9000 of funding.

The support available through the AMSP and the funding incentive provided by the Advanced Maths Premium mean there is a real opportunity to bring about a steep increase in participation in maths education to the age of 18.

Funding pressures and teacher shortages mean it will certainly not be easy to make it the norm for all students to study maths post-16, and it will take several years. However, the AMSP, the Maths Hubs Network and the funding premium are there to help and it is vital that schools and colleges take advantage of their support. Studying maths to the age of 18 would benefit many thousands of young people, improving their prospects in higher education and employment and helping them to play a full part in society.

If your school or college doesn’t currently offer the full suite of Core Maths, AS Maths, AS Further Maths, A level Maths and A level Further Maths, please consider how you can make this possible in the future. A good place to start is to contact the AMSP for advice.

[2] Bertrand Russell, ‘In Praise of Idleness and other essays’, Routledge, reprinted 2006.

[6] More details and an example calculation can be found at https://amsp.org.uk/leadership/funding